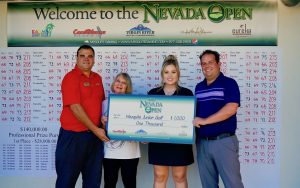 During the final day of the 2016 Nevada Open golf tournament on Thursday, Nov. 10, Mesquite Gaming, owners of the CasaBlanca Resort and Virgin River Casino, presented a $1,000 monetary donation to the Virgin Valley Junior Golf Association (VVJGA).

“Contributing to bettering youth in our communities is very much in line with our goals as an organization,” said Christian Adderson, Nevada Open tournament director. “We’re proud of these opportunities to support such associations that inspire the game of golf within our youth and take their game to the next level.”

Mesquite has a long-standing history with junior golf, given its culture. An important attribute of junior golf is not only learning the game of a lifetime but gaining experience that will benefit a young player throughout his or her educational and professional career. The programs of VVJGA not only develop potential physical skills but also discipline, respect, and social interaction. Beginning in June, the clinics occur three times per week each month. Each lesson plan consists of the rules of golf and range or short game practice, followed by a short competition. Tournaments are held throughout July and August at several Mesquite courses.