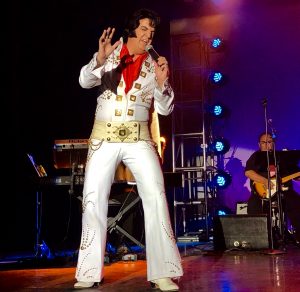 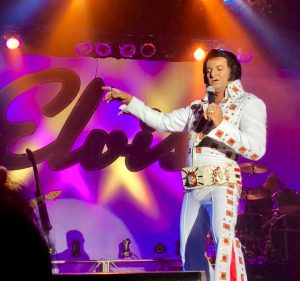 Mesquite, Nev. – Elvis Fans of all ages made their way to Mesquite, Nev. this past weekend and were ‘all shook up’ as their former heartthrob was brought back to life at the ninth annual Elvis Rocks Mesquite contest. More than 20 of the best Elvis tribute artists across America competed for the crown and $10,000 in total cash prizes. Competition was incredibly fierce across all three eras, the ‘50s, ‘60s and ‘70s, and featured a diverse age range among entertainers, including a 73-year-old great grandmother, DJ, and the world’s oldest Elvis tribute artist, Doc Elvis who, at 83-years-old, just had back surgery the week prior but couldn’t let that stop him from missing the annual performance.

Performers fully immersed themselves into the competition with their rhinestone studded jumpsuits, chops and of course by mastering Elvis’ iconic dance moves. This year’s grand champion was Caden Gamblin, from Tucson, Ariz. The 18-year-old, who also won the ‘60s era division, won the crowd over with his impressive vocals, hip-thrusting dance moves and uncanny appearance to the King of Rock ‘n’ Roll himself. Fans cheered and gave a standing ovation as Gamblin put on a show to remember.

Various tribute artists managed to leave their mark on this year’s event, including James King who came out as champion of the ‘50s era and also won second place overall in the finals competition. Another notable winner was Rob Ely from northern Calif., who won the ‘70s era division and was voted as the 2018 fan favorite.

“I got started at a very young age doing Elvis after I saw him on the ’68 Comeback Special,” said James King, the ‘50s era winner. “I love to perform his music and keep his memory alive.”

“Every year Elvis Rocks Mesquite brings so much excitement to the CasaBlanca,” said Krissy Ayon, director of entertainment for Mesquite Gaming. “All of the entertainers give it their all on the stage, and this year we were fortunate enough to have celebrity judge Mr. Rich Little along with host Kelly Clinton Holmes who kept the energy high all weekend long.”

For photos of the 2018 Elvis Rocks Mesquite contest, click here.